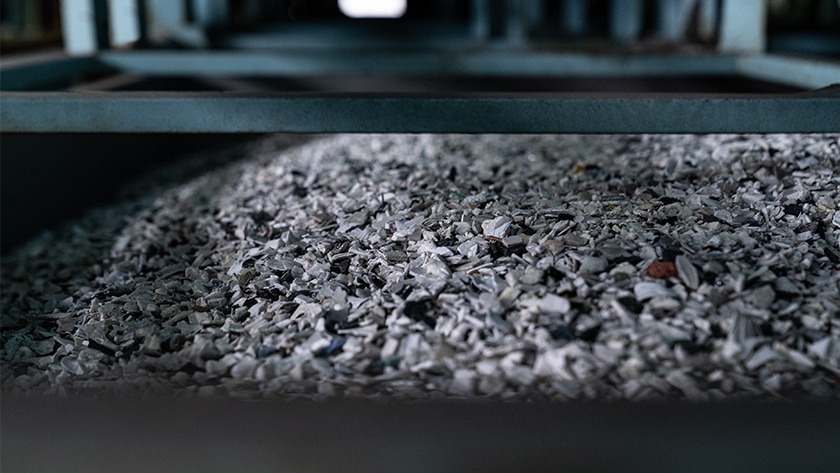 Even before Japan enacted the Home Appliance Recycling Law in 2001, Mitsubishi Electric was already making strides in the recycling industry. One of the most impressive of these achievements was reaching an 80% recovery rate of high-quality plastic from used home appliances – one among many initiatives geared towards helping build a more sustainable society. Here is a look at how Mitsubishi Electric’s projects have drastically boosted recycling rates from a mere 6% to their current standards. 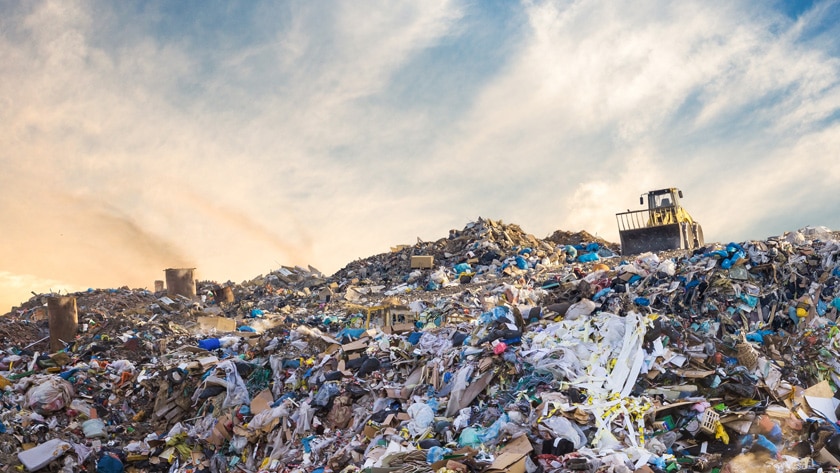 The Problem with Plastic

In recent years, many have grown increasingly aware of the importance of sustainable practices in society – leading to a widespread boost in social awareness and fervent environmental protection efforts. But where did this pioneering push for sustainability first begin? Turn back the clock 30-plus years to mid-1980s Germany; a frontrunner in the field, Germany was the first nation to implement laws to limit waste generation amidst increased interest in waste management and environmental conservation efforts from its citizens.

Other countries soon followed suit by implementing similar policies. In Japan, however, it wasn’t until 1991 that the country first enacted a law encouraging the use of recycled materials. And now, entities across the world are turning to concrete action in varied settings – starting from grassroots movements to cutting-edge technology – with the hope of building a more sustainable society. Naturally, environmental policies are enforced at the industry-level, through enforcing a global consensus that companies have a social responsibility to implement sustainable practices.

Before Japan enacted the Home Appliance Recycling Law in 2001, Mitsubishi Electric had made it a fundamental business practice to protect and conserve the environment. One way the firm moved this to action was in 1999, when it implemented vigorous recycling practices for used home appliances – an unprecedented endeavor at the time. Since then, Mitsubishi Electric has continued to drive technological development. And 2010 signaled a new phase in these efforts with the inauguration of the firm's high-quality plastic recycling program – where Mitsubishi Electric collects and recycles plastic from used home appliances and reuses it in new units. 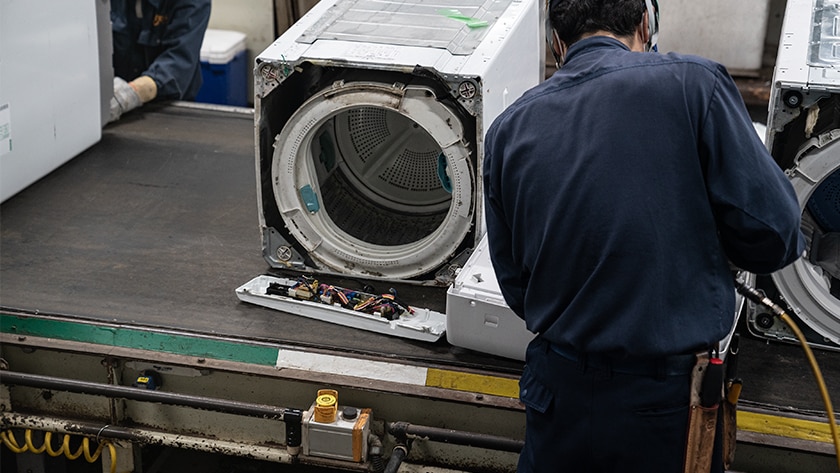 However, plastic recycling isn’t a simple process, and there is one point worth keeping in mind here; there are two ways to use recycled plastics. The first is to use the plastic in “downgrades,” or simple products like clothes hangers where design and durability aren’t a concern. The other is to use that same recycled plastic in high-quality products at the level that brand-new plastic can perform. Mitsubishi Electric considers the latter to be plastic recycling at its truest, and the firm works in pursuit of this ideal through two in-house recycling centers: named Hyper Cycle Systems (HCS) and Green Cycle Systems (GCS).

At HCS, first established in 1998, staff begin the recycling process by dismantling used appliances such as refrigerators, washing machines, air conditioners, and televisions. Metal and plastic parts contained within undergo a process of grinding and crushing. While the foundation of HCS in itself represents a first in the recycling industry, for a time the factory was successful in recycling only six percent of plastic from disposed units – attributed to the challenging aspects of fine-particle separation. So, if one were to recycle 120 air conditioner units, only 7.5 air conditioners could be recreated from the resulting materials in this scenario. This is where Green Cycle Systems comes in – after 10 years of planning and development, Mitsubishi Electric founded the plant in 2010 as a way to drastically improve high-quality plastic recovery in the recycling process.

Yasuto Iseki, one of the founders of both HCS and GCS who now belongs to Mitsubishi Electric’s Living Environment & Digital Media Equipment Group, reflects on this history: "Before these two plants came about, there were waste disposal services for other garbage like iron that would handle recycling, but nothing like that existed for plastic in Japan. Mitsubishi Electric manufactures products that utilize a lot of plastic, like air conditioners and refrigerators – and being in that position, we have an obligation to fulfill our social responsibilities in recycling those materials. These plants are one solution to that end."

The process enables Mitsubishi Electric to take used products, extract their high-quality plastic, and reapply them in new merchandise. He reflects, "While the industry is taking note of closed-loop recycling, Mitsubishi Electric is the only one to really implement such a system. You don’t see any other firms in the home-appliance industry applying this technology to the same extent we are. It was such a novel concept that many people first became aware of it through our technology."

State of the Art

While Hyper Cycle Systems had existing technology to build upon, the ambitious Green Cycle Systems had no predecessors to provide a basis for development. However, being fully committed to technological advancement for sustainability, Mitsubishi Electric has made an unprecedented move: sourcing both equipment and material technologies from a variety of in-house centers to kickstart the project. From there, it all began with a pilot laboratory and the arduous process of testing prototypes – and progress there was very slight. Looking back on the beginning stages, Iseki reminisces that while it was a difficult path to forge, the struggle made it all the more worth it.

At Green Cycle Systems, workers take high-quality plastic from home appliances and break it down into three main components: polypropylene (PP), polystyrene (PS), and acrylonitrile-butadiene-styrene (ABS). Two factors that play a major role here are natural buoyancy and static electricity. First is buoyancy; Mitsubishi Electric employs a proprietary process here in which the finely granulated plastic is put in water, where heavier-than-water PS and ABS naturally sink, whereas PP floats to the top for extraction. The firm additionally applies a method known as jigging to more precisely collect PS and ABS blends; using a special jig separator, engineers can more easily separate blended compounds as well as those with heavier specific gravities. Next, to separate the PS and ABS particles, engineers agitate the particles in a tumbling barrel to generate static electricity. PS is naturally drawn to the positive charge while ABS is drawn to the negative charge, so by applying a voltage to these two plastics, one is able to further separate the compounds.

Mitsubishi Electric has also developed another proprietary technology using X-rays to remove impurities. This technology has allowed for a process that removes brominated flame retardants – substances banned in Europe – as well as glass fibers from plastic material. Using this technology together with the previously mentioned extraction techniques, the recycle rate for high-quality plastic jumped from 6% to an impressive 80%. Given that the high-quality plastic recovered here is on a par with that of new appliances without sacrificing design or durability, this increase in recycling numbers is simply astounding. Incidentally, if one applies this rate to the 120 air conditioner units example mentioned earlier, this process would allow for 96 new units reborn from the original 120.

While one could call this spike in numbers a huge milestone for the company, Iseki keeps his eyes trained on the future. He explains, "While it is highly-refined plastic, it’s still recycled plastic, meaning we continue to face challenges in design and functionality. That’s the next point I want to tackle. People also assume that recycled plastic is subject to that classic ‘quality versus quantity’ trade-off wherein pursuing higher-purity plastic from the recycling process means that we are able to recover less of it. So in the future, we want to aim towards recovering high-quality plastic at high quantities."

He continues further, "I think we’ll need a technological breakthrough to make this a reality – we can’t expect noticeable results overnight. Continuous, minor revisions to technology at each step of the plastic recycling process is the only way to get there." He is steady and unwavering in this self-imposed objective. And his words hint of Mitsubishi Electric’s long-term vision – pursuing quality before profits, efforts that inevitably lead towards a more sustainable society.

Water for Life: Realizing Sustainable Water Practices in Society
Towards a Sustainable Society – The Engineers of Tomorrow Gather for the Mitsubishi Electric Cup
The Strength of People: Embracing Differences, Conquering Challenges
Train Power: How Harnessing Energy from Trains Can Help Run Cities