Brea, CA – March 28, 2017 – As part of its commitment to clean energy, 85°C Bakery Cafe installed photovoltaic (PV) panels from Mitsubishi Electric US, Inc. to power its central kitchen in Brea, California. 85°C Bakery Cafe installed a 325 kW system including 1,226 Mitsubishi Electric Diamond Premium™ solar modules and 7 inverters from Yaskawa - Solectria Solar. The system is projected to produce 527,702kWh of power annually, which is equal to saving 41,730 gallons of gasoline in one year. 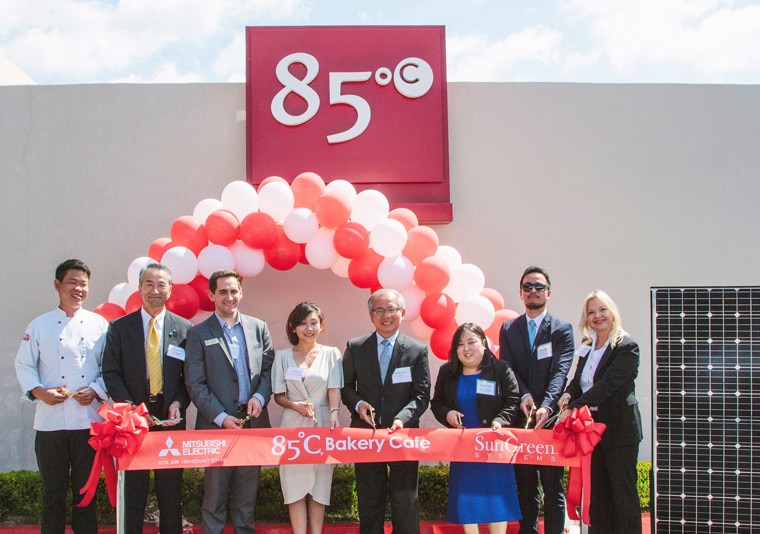 To honor the bakery's commitment to clean energy and the environment, Mitsubishi Electric US, Inc. held a ribbon cutting ceremony at the Brea headquarters on Monday, March 27. Guests including Mitsubishi Electric US Inc. president and CEO Kent Hora, 85°C Bakery Cafe CEO Henry Cheng, and City of Brea Mayor Cecilia Hupp mingled at the central kitchen, which is responsible for mixing the wet and dry ingredients for all 27 locations in the U.S.


"85°C Bakery Cafe is pleased to announce our first solar powered facility worldwide. The environment and sustainability has always been a priority for our company," said Cheng, who is also a master chef at 85°C Bakery Cafe. Mr. Cheng has won several competitive bakers' awards, including a gold medal in the World Skill Pastry Competition. Founded in 2004, 85°C Bakery Café has seen rapid growth and popularity and is planning to open it's 1,000th location worldwide this 2017 year.


"Mitsubishi Electric is honored to be selected to supply PV modules for 85°C Bakery Cafe's first solar installation," said Hora. "We appreciate the bakery's commitment to going green and its environmental leadership in the community."


The system was installed by Irwindale, CA- based installer SunGreen Systems whose CEO John Hoffman worked closely with 85°C Bakery Cafe to meet the bakery's energy needs. "In addition to greatly reducing carbon emissions, this system will pay for itself within 5 years," said Hoffman. "After its payback, 85°C Bakery Café will enjoy free energy for the next 25 to 30 years."

85°C Bakery Cafe has more than 900 locations worldwide. In 2008, the first U.S. store opened in Irvine, CA. The location quickly became an overnight sensation, with more than 5,000 Yelp reviews and lines out the door. Featured on TIME, CNN, NPR, and Travel Channel, 85°C Bakery Cafe has become a culinary phenomenon and a new cafe experience for all.

Mitsubishi Electric US, Inc. sells high quality solar panels to deliver clean, reliable energy to its customers throughout the world. With more than 90 years of electronics manufacturing expertise and 40 years' experience developing solar power technology in its corporate group, Mitsubishi Electric is one of the most established solar providers in the industry. Residential, commercial, and government customers can count on the 25-year solar module limited warranty offered by Mitsubishi Electric US, Inc. to enhance their return on investment. Additional information is available at www.MitsubishiElectricSolar.com or by calling 714.220.2500.