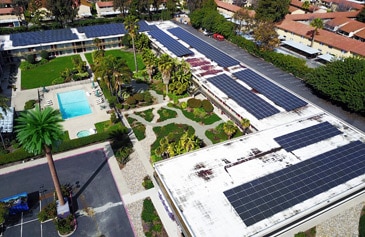 Cypress, CA – April 17, 2017 – Those visiting Silicon Valley can now book accommodations at the environmentally-friendly Ramada Silicon Valley located in Sunnyvale, Ca. The hotel recently announced the completion of a photovoltaic (PV) system by Sky Power Solar with solar modules from Mitsubishi Electric US, Inc. The 269 kW system includes 996 Mitsubishi Electric Diamond Premium solar modules and is projected to produce 426,000 kWh of power annually. The electricity generated by the system is expected to power at least 70 percent of the hotel's 175 guest rooms, public lighting and three EV charging stations.

The clean energy produced by the system is expected to equal a reduction of 8,727 tons of CO2 over 25 years or planting 203,000 trees. In addition to the environmental benefits, the PV system has the potential to save the hotel approximately $100,000 per year.

Situated between San Francisco and the Monterey Peninsula, the hotel has experienced rising energy costs, which prompted the decision to go solar. "We are proud to be able to help slow down the effects of global warming and make a contribution towards achieving the climate action initiatives of the City of Sunnyvale," says Jeffry Chang, President and co-owner, Ramada Silicon Valley.

"Thanks to support from Bay Area Air Quality Management District (BAAQMD), we installed 3 EV Charging Stations (Level II) which will help to improve the air quality. We will be offering convenient and accessible EV charging to both our hotel guests and the general public," says David Chang, VP and co-owner, Ramada Silicon Valley.

An elevated, semi-custom ISA racking system was chosen to maximize energy generation. "Considerable effort was put into a unique design to generate targeted savings making this a notable and worthwhile project," says Bob Winn, Sky Power's president. The company has been installing residential and commercial PV solar projects in the SF Bay Area since 2001.

Mitsubishi Electric US, Inc. sells high quality solar panels to deliver clean, reliable energy to its customers throughout the world. With more than 90 years of electronics manufacturing expertise and 40 years' experience developing solar power technology, Mitsubishi Electric is one of the most established solar providers in the industry. Residential, commercial, and government customers can count on the 25-year solar module limited warranty offered by Mitsubishi Electric US, Inc. to enhance their return on investment. Additional information is available at www.MitsubishiElectricSolar.com or by calling 714.220.2500.